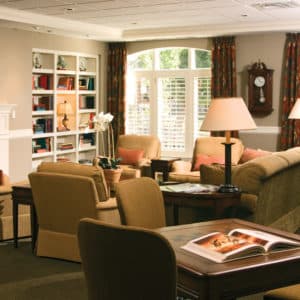 Martha Elinwood, daughter of resident Michael Walling, took some time to share with us a few of the many favorite times of her dad.

Michael Walling, the game show contestant:
The whole family gathered around the television in the late 60s when he was a contestant on the TV game show, Password. He may not have made it to the “Tournament of Champions” but it’s safe to say Michael has always been a champion to them!

Michael Walling, the proud stage dad:
She also fondly remembers how he would love to listen to her sing and play the guitar in her pre-teens. He was so proud of her when she performed in the 6th grade talent show. She remembered the feeling of being a star in his eyes, “I thought I was just awful but he made me think I could have a career as a professional folk singer.”

Michael Walling, the teacher and artist:
As an artist, Michael Walling was a teacher of painting and drawing at the Kansas City Art Institute for 45 years. “When we were kids we spent many hours (not always willingly) in museums with our parents. I may not have always wanted to stay and look at paintings as long as my father, but he was so good about explaining the paintings.” The wonderful teacher he was allowed for all the questions – no question was a bad question, and his kids couldn’t ask too many.

Martha shared two photos of her father. One poolside is from the weekend of her wedding in 1993, “I simply love how happy he looks."
The second photo is with Martha, her dad, and his long time friend Beverly at his granddaughter's wedding in 2016.